This post is long overdue but got put on the back burner because of a busy schedule of juggling multiple manuscripts, among other things. BUT! I am determined to still post about my time at Crown the Empire‘s show in Houston at House of Blues.

The first time I saw Crown the Empire… I believe it was a festival in Houston I attended, after South by Southwest in 2011. It was called “Houston, We Have a Problem” and ironically is infamously known by my best friend/partner and me as the ultimate problem–that’s a long story for another time. Although we shot photos of the band performing, I didn’t take a liking to them right away until much later when I randomly stumbled upon their song, “Makeshift Chemistry,” which has lyrics that encapsulated my heart:

Darling, won’t you forgive me?
I’m just looking for a little bit of love in this heartbreak city.

Since discovering the band, two members have departed from the group–Benn Suede and most recently, Dave Escamilla. Both sad situations and honestly, the band hasn’t been the same without them. Not that those two guys were the entire essence of Crown the Empire, but seeing them at House of Blues, I could feel that something was missing. The band did great, considering, but I personally thought they were an emptiness that needed to be filled.

Thank the LORD for House of Blues protocol. It’s a relief that House of Blues 1) has a photo pit, and 2) has security escort photographers to and from the pit. I was under a lot of stress that day, because I had to wait for the guest/media list to get squared away, and I had never been to House of Blues and therefore anxious about the photographer situation. The poor guy at the window was trying his best to keep me calm and reassure me I would be fine, dealing with my incessant questions and franticness, I might add. But he was a good guy, keeping calm and not letting my anxious, erratic behavior rattle him. Also a big thank you to Psyco, the venue security guard at the photo pit (yes, his name is actually Psyco), who talked with me before the show started and shared stories of him working in the industry, at various venue locations. He was a cool dude.

It’s odd to me that a band as notorious as Crown the Empire is OPENING for a tour, but I guess it made sense since the co-headliners were Black Veil Brides and Asking Alexandria–both notable names in the scene and hella good ones to be on tour with. CTE’s set list was much shorter and took a different approach that I was not prepared for. I was more curious to see how they carry on without Dave. You can read a more in-depth review of the show at Music Connection‘s site:

As mentioned, they were the opening band, and that also meant that they didn’t have the BEST lighting, unless they programmed it that way to which I say, WHY. It was dark most of the time, and I don’t have a kick-ass fancy camera to take photos in that much darkness. I did my best to position each band member in front of color lights from behind or overhead and decided to do more moody type editing in Photoshop later. Not my best work, but I did what I could with the situation handed to me. 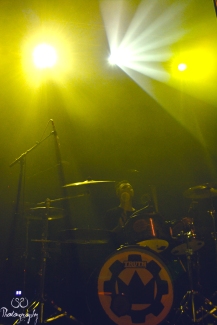 Howdy! My name is Siri, and I’m an award-winning marketer. My goal in life is to stay creative. I have a plethora of ideas in my head, so I strive to get all of them down on paper. From writing, editing, and designing to volunteering, singing, and more, it gives me great joy to use my skills and talent to make an impact on people.
(photo credit: Khoa D. Photography)